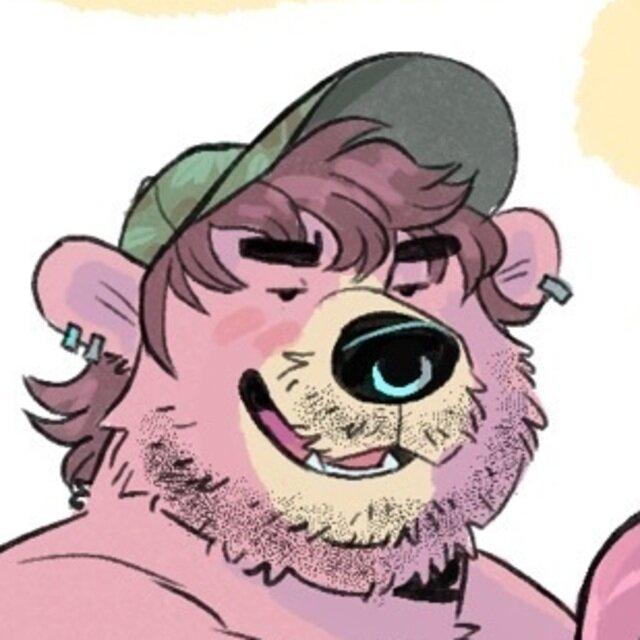 an NSFW chatzone with an immersive rainforest atmosphere!

Hey, y’all! I’m Shon, lowkey furry and actual employee here at Spaces. I saw some mentions around profile pics being Thanos snapped away even when SFW. We’re still formalizing content guidelines, but you should (and will) be able to have a profile pic that is a furry illustration as long as it isn’t super explicit (Thanks, App Store lol). Apologies for the hiccup! We’re still evolving as a platform. Also, consider me your direct line for feedback that we can pass along to our team 🐗
I would like to reassure everyone here that I changed our photo moderation policy several days ago. We now accept profile photos that are drawings/artwork/paintings. This mistake with your photo skooch should not have happened. The whole moderation team were told explicitly last week to stop rejecting these photos.
Furry art I suppose but I feel like Dramamine’s work is an awesome bridge between gay bear/pup/leather art and furry art, so it’s unfair to really categorise it too specially.
Good point! Its been pretty eclectic which is cool, but if folks wanted to like voice whether theyed prefer more of an art sharing spot, or maybe comics? Or like just a general chat space?
Just got a message from Hornet saying my profile picture violates the guidelines ☹️ It was a normal, SFW furry illustration, this happen to anyone else?
Love your work and very excited to have a community around it, would definitely join a Discord or Telegram so our Android comrades could be here as well and we can use furry profile pictures, but happy to be here as well if it’s your platform of choice
I was always into the art I’d find on tumblr and eventually found out the person I was dating is a furry, and they took me to a con and that was that heh
Oh yeah! I started that space! We swap a bunch of furry art there too.
A furry can sniff out bad anthro art from ten paces
Fairly new to the community. Question: do y’all ever tell anyone outside of the cultures that you’re a furry? Like, do you have a “coming out”? Or is it something you keep private, and only celebrate with other furries?
Be whatever u want. Thats the beauty of furry. Yes foxes are a popular species for fursonas. But choose a fursona that makes u happy
I feel like I have a lot to learn! Starting with basics.. is this group for furry fetish folks? Or is it an anime of people portrayal? Somebody please help a newbie out!! Lol 🤪
I’d love to see more furry artists in mainstream comics because they truly have a better grasp on anatomy, and kineticism than 90% of the illustrators in the industry
And I agree on furries in comics; try watching a popular mainstream comic artist draw Howard the Duck or Rocket Raccoon
I’m an artist and my art circles were already inundated with furries so I just sort of became one via osmosis.
God yeah I have so many cute and sexy furry stickers on telegram
Would you be willing to enlighten me a little about the furry fury? I know about the community, but really know nothing about what it means to be a furry.. interested in learning more.. 💋
I’m gonna be brave and post art. I commissioned my pal to paint my dragon-sona in a bridle and I’m very happy with the result
That sounds pretty rad! I havnt played too much text space stuff and nahh that was all useful lol I spent more time skating than on computers when i was younger and feel like i missed out on a lot. Plus i get excited when i see anything red wall
Just finished filming BLOWW (Boston League of Wicked Wrestlers—an all queer wrestling league)’s first live show in two years. If anyone is based in new England and into watch queer punk baddies bash each other around hmu for socials to follow and/or keep an eye out for upcoming shows!
Horny Bowser art is the best. Need to find some horny Warrior art next haha
I apologize for this. The moderator who rejected your photo is on her final warning. One more sloppy mistake like this and she is looking for a new job. Don’t worry about what the message says. Nothing happens no matter how many photos get rejected.
Yeah it’s great. I swear furry artists are the best in the business
i’ve only recently realized that i like furries and think im a furry myself
Woah, wearwolf biker daddy and friends yuhs for art drops
God I miss those days on tumblr. I was 13 years old reading and beating to that content
The only furry gay ones i had were these 2 (bears of course)
This is a furry space
Are you all in the barn space? Some great art being shared there
I am a 37 year old man with two master’s degrees and Dramamine’s writing accompanying his drawings has me moaning like a cat in heat